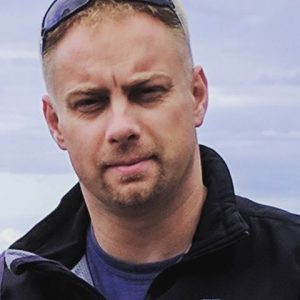 Many in the keratoconus community have met Ash Winter on-line through his tales of adventure. Ash is a British army veteran (Queen’s Royal Hussars) who learned he had keratoconus in 2010. He posts positive messages on the NKCF and Keratoconus Great Britain websites, as well as his own Twitter, @ash_adventure, and Instagram accounts, @ash.adventure.

Since his diagnosis, he has participated with disabled veteran groups and other sight-related charities in physical tests including 24 hour bike rides, cycling the length of Great Britain, snow ski racing, distance swimming, and triathlons. Ash shares his experiences while coping with blurred vision, ghosting, and sore eyes. He wears piggyback lenses to achieve useful vision.

Last year, Ash entered our inaugural film festival. In his film he urged viewers to ‘get up and get out’ and not let KC stop them.

This year, he upped the challenge. His video was filmed on a 10 day dog-sled expedition in the northernmost Sweden. Ash said of the journey, “Great for testing not only my own fortitude but also my contact lenses!” 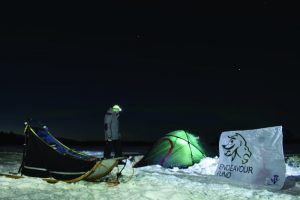 Ash has stated his goal is to inspire others with KC to be positive and embrace life by testing himself in extreme conditions. “I believe in the power of sport and adventure – you can lose yourself in the experience, and not worry about things you cannot change.”

Along with the beautiful Artic scenery and the northern lights, Ash also experienced his eyelids freezing together. At -35°C (-31° F) he remarked that “everything froze, including my eye drops and solution!”

In this year’s video, he challenges his viewers, “What will you do to beat my extreme adventure?”